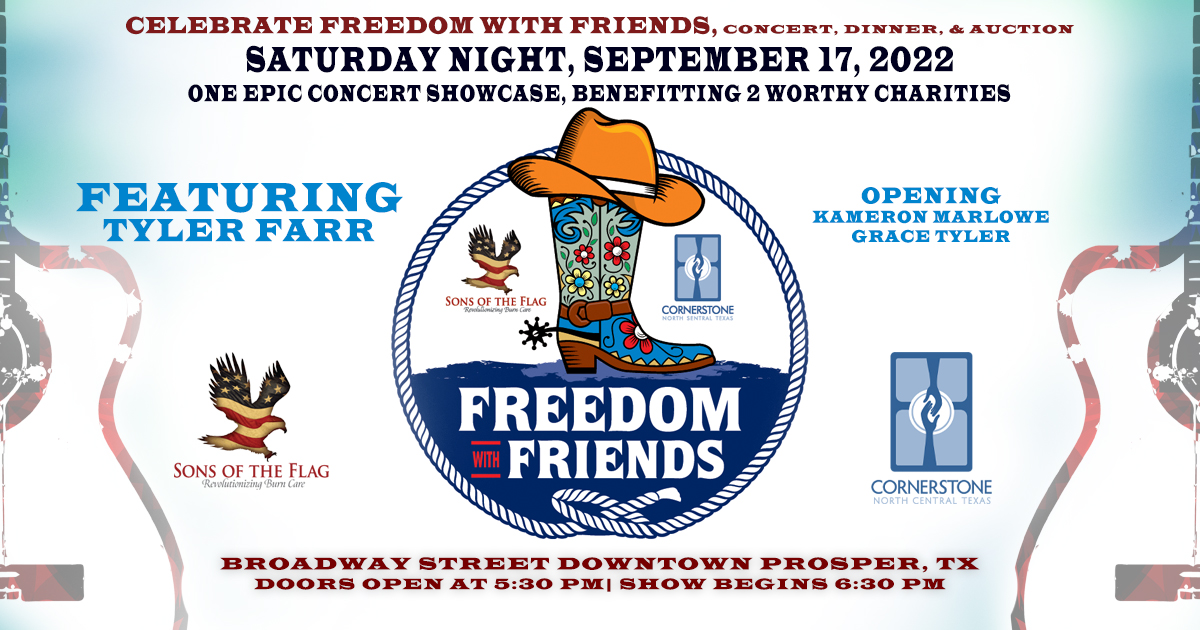 Each year, both Sons of the Flag and Cornerstone North Central Texas each proudly host an outstanding evening event to benefit their respective nonprofit organizations. This year, we are proud to partner together to bring you the biggest and best event in Prosper at a brand-new venue!

We could not think of a better event name to share than, “FREEDOM WITH FRIENDS“. Collectively, our two nonprofit organizations are synonymous with freedom, because of its many definitions. Our country’s freedom, the sacrifice made by our veterans for our freedom, financial freedom and independence, as well as gaining freedom from burden and pain, and granting the freedom for someone to live their best life!

We proudly present our Freedom with Friends Concert, Dinner, and Auction in Prosper, Texas. We cannot thank the Pettis Family enough for their continued support!

This year, we are so excited to share with you that our featured artist will be none other than, Mr. Tyler Farr!

“One of the best male vocalists in Country music today,” (Taste of Country), Tyler Farr is the first artist signed to Jason Aldean’s Night Train Records/BBR Music Group. The Country-rocker, with three No.1 songs to his credit (“Redneck Crazy,” “Whiskey in My Water,” and “A Guy Walks Into a Bar”) broke onto the scene with the 2013 release of his debut album, Redneck Crazy, which landed at No. 2 on the Billboard Country Albums Chart and #5 on the Billboard Top 200. Farr’s platinum-selling title-track “Redneck Crazy” projected Farr forward to celebrate back-to-back No. 1 singles, including his first No. 1 as a songwriter, with his Platinum-certified hit “Whiskey in my Water.”

We hope you will join us in September for this fantastic show, and more importantly, to show your support for our two charities:

Cornerstone North Central Texas, a nonprofit organization that empowers neighbors in need through assistance and accountability.