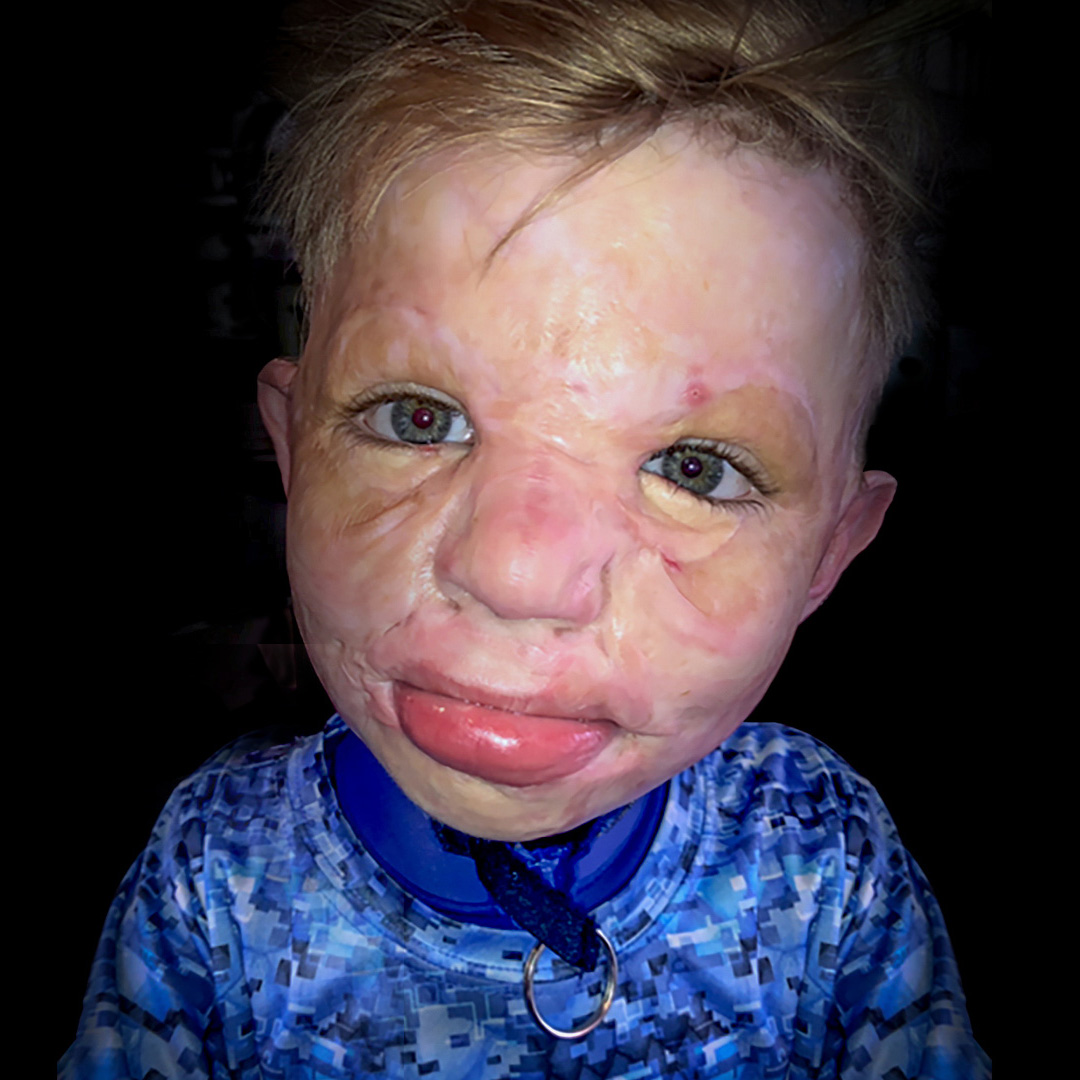 AN ASTONISHING ATTITUDE OF GRATITUDE

On October 27, 2017, a marshmallow bonfire turned into an unthinkable nightmare for Lt. Destin Weaver’s son Ronald. Ronald, who was 7 years old at the time, and his little cousin were staying with Destin’s parents at the family farm. Destin, who runs a construction business in addition to serving as a firefighter with the Maumelle Fire Department in Arkansas, was on a construction job. At lunch time, Destin called his father to check in. His dad was working on his tractor and had set up a little burn pit for Ronald and his cousin to roast marshmallows and cook hot dogs. The burn pit was no more than 8-10 feet away from where Destin’s father wasworking with the tractor.

Ronald and his cousin wanted to make the fire bigger. While their grandfather had his back turned, the boys found a bottle of gas. “The next phone call I got was my dad saying he was rushing Ronald to the emergency room, and that it was very bad.”
Ronald ended up with 2nd and 3rd degree burns on 36% of his body. The severity of his injuries sent shockwaves through the family. “His accident messed my dad up mentally for life. He feels responsible. I blame myself. As a firefighter, I should have known to teach him about fire safety to prevent him from making this mistake.”

Following the accident, Destin and Ronald spent a grueling three months of surgeries and recovery at Arkansas Children’s Hospital. Yet they faced even greater challenges ahead. “I was going through a divorce at the time, so my family helped take care of my other kids so I didn’t have to worry while Ronald and I were in hospital. But after we were discharged and got back home, I had to start making house payments, keep the lights on, get all of the kids fed and bathed every night, on top of doing Ronald’s excruciating physical therapy. It took four hours a day and was the worst thing we had to go through. I hated myself for having to do it to him.” Managing Ronald’s recovery while also being his family’s primary caregiver became a crushing responsibility.

Then Destin’s brother, also a firefighter, introduced him to a SOTF Task Force member who simply told him, “Let us know what you need.” The connection transformed the Weavers’ lives. “It was like destiny fell into our lap,” Destin recalls in amazement. “I’d fallen behind on utility bills and SOTF paid my rent for three months so that I didn’t have to worry about making sure we weren’t going to be evicted, or the gas wasn’t going to get turned off.

That was a huge burden of stress lifted off me. That gave us the breathing room to keep from going under. It kept me from losing everything and having a mental breakdown. I was able to devote myself to Ronald and get him taken care of. I don’t know what I would have done without SOTF’s help. It’s been a blessing, I can’t say it enough.” 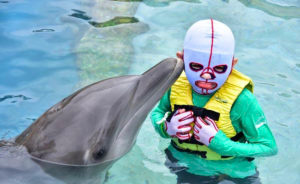 Ronald playing with dolphins on a
recent family vacation and first time
swimmingsince his accident.

Then this year, the Weaver family encountered unforeseen hardship obtaining compression garments vital for Ronald’s recovery. “We scraped together the money to buy Ronald new compression garments–$6,000 for two sets. He wears gloves, his whole upper trunk is covered, he has compressions on his legs, and a mask that covers his ears– everything. Only his fingertips and feet are exposed. A set of compressions lasts 2-3-months. The insurance company said they would reimburse us. But they didn’t. School was about to start and the set we’d bought Ronald for the summer was worn out and losing its compression. He couldn’t go to school with only one set of compressions–that’s like having to wear the same underwear all day every day. So SOTF helped us buy five new sets.”

The gift nurtured Ronald’s sense ofnormalcy and emboldened him. “Now Ronald has a different set, in different colors, for every day of the week. He can match it to the color clothes he’s wearing. It’s boosted his self-esteem and confidence. Ronald is a hoot, he will brighten up any room. He’ll crack jokes and have you laughing in seconds.”

Destin reflects that this journey has been enlightening and overwhelming. He is very grateful for his family’s sacrificial support. “All of my kids have sacrificed a lot to ensure Ronald had the love and care he needed, and none of them have complained. It’s taught me a lot as a parent and it’s matured him a lot as a young man. It was one of the toughest things as a parent that you could ever deal with but me and Ronald, we know each other now. Our relationship has made tremendous improvements.”

This newfound closeness eventually led Destin to an unforgettable conversation with his son. “Once when we were waiting for a doctor’s appointment, I asked Ronald, “What’s the worst thing that’s ever happened to you?” I expected him to say staying in hospital or the surgeries or getting burnt. But his response was “getting my iPad taken away.” Can you believe that?”

When I asked him, “What’s the bestthing to ever happen to you?” He says “Well that’s easy–getting burnt.” and starts listing all the things he feels he’s gained from his experience. “I got to spend one-on-one time with you for three months, every time I have a surgery Pawpaw brings me new toys, the school threw me a welcome back party and a parade. I got to be on the news. Now I get to go to burn camp every summer.” He went on and on and on. For him to have that positive of an attitude about it is astonishing.”
Ronald’s posture of gratitude has clearly had a deep impact on his father. Destin’s amazement at Ronald’s relentless optimism is matched by his own profound sense of thankfulness for the support he has received, “I cannot thank SOTF enough. You have no idea how much they changed Ronald’s life by helping out with his compression garments, and saved us from losing everything. We could never have gotten through this without them.”