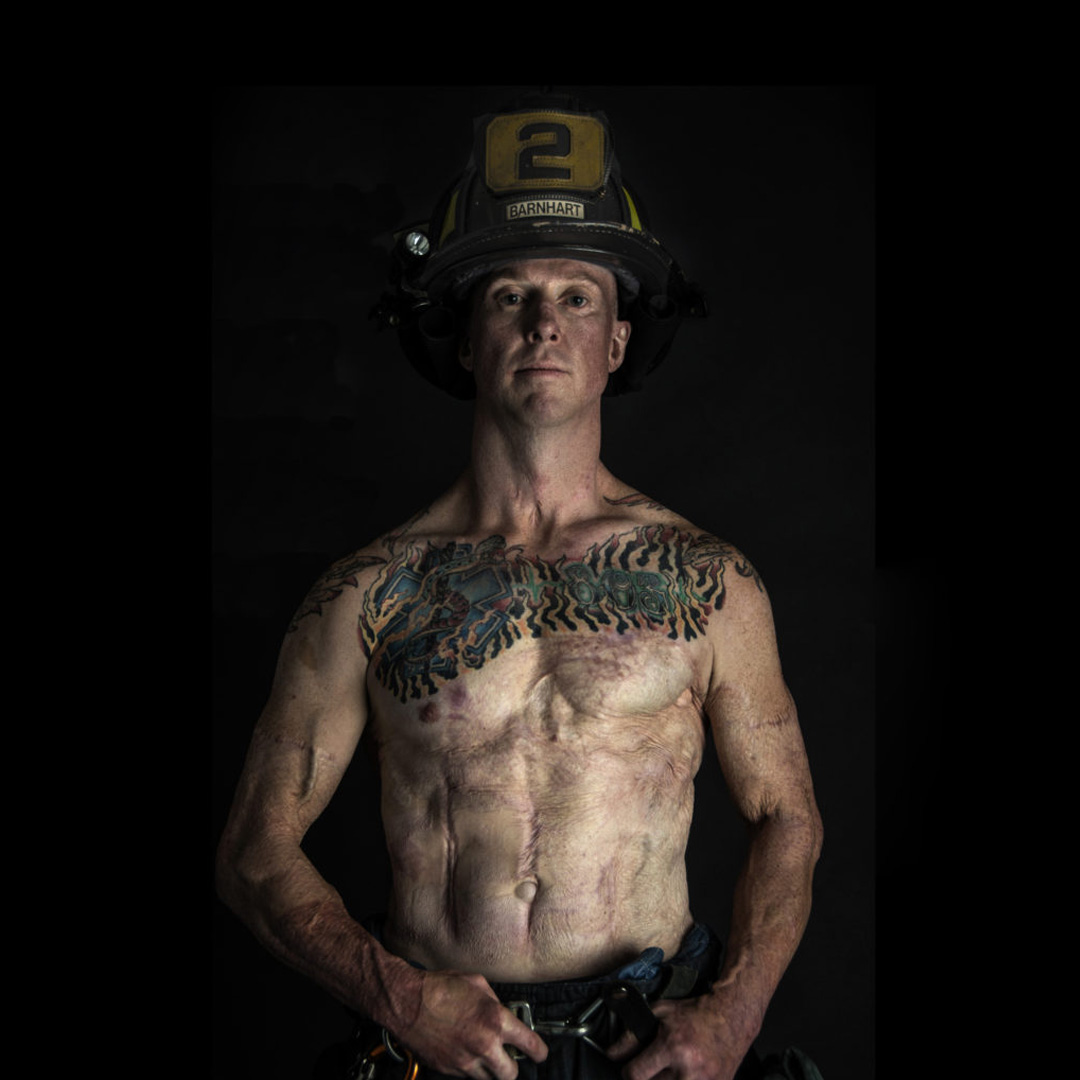 “I wake up on the couch, look over my right shoulder and see one wall completely on fire.” The 45 seconds that followed this realization altered Devin Barnhart’s life forever.

Devin was staying at his friend Joey’s house. Joey’s mother had just succumbed to cancer, and his friends gathered to console him. When Devin awoke to a wall of fire, he yelled “FIRE!”, shook awake his friend Jeremy who was sleeping on a nearby recliner, and they ran out the front door. Realizing that Joey and his girlfriend Amber weren’t outside, wordlessly, they both ran back into the house. “Jeremy went upstairs, I went downstairs. I went into the basement, and when I turned the corner, all I remember is fire. I’ll never forget the sound. The popping, the crackling. It was like a freight train passing by. Everything was on fire. I go back to the stairwell and at the top of the stairs all I see is a glow. I remember thinking, this is it. This is where they’re going to find my body. Then I decided no, they’re going to find me outside. So, I pulled my shirt over my face and ran up the stairs, tripped and fell on the top step. That fall probably saved me because I dropped to my hands and knees. I was below all of the smoke. I had a 15 feet crawl to the front door. As I’m crawling, all of the carpet and padding is peeling off underneath my hands.

It’s disintegrating from the heat.” After what felt like an eternity of crawling, Devin made it outside and ran across the street screaming for help. Just 45 seconds since waking. When he finally heard sirens approaching, Devin was overwhelmed with relief; he knew that meant somebody was coming to help.

Devin sustained burns to 75% of his body. He spent the next 6 weeks in a medicated coma, followed by 2 weeks in the ICU, then 2 months in rehab. His coma was filled with morphine-fueled nightmares that would revisit him for the next 2 years of his recovery. While in hospital, Devin missed the funeral of his friends Joey and Amber. It wasn’t until later that he learned Jeremy had also passed away trying to save them.

Recovery was excruciating. Devin recalls being bathed and scrubbed in a debridement tub with what felt like metal scouring pads to debride all of the dead skin, fight infection, and improve wound healing. “I can’t even begin to describe the level of pain. No amount of pain medication could help. My parents were present for one of the treatments; the three of us held hands and just cried.” But Devin wouldn’t let the nurses stop scrubbing, he knew he needed to endure for his recovery.

Devin had over 30 surgeries. In addition to the painful rawness from skin grafts, he developed heterotopic ossification in both elbows. “It’s common with burn and spinal injuries. Calcium deposits around your joints and hardens into bone. My elbows couldn’t flex or extend, they were locked at 90ᵒ angles. I couldn’t touch my face, brush my teeth, or get food to my mouth.” Devin had to relearn how to eat, get dressed, bathe, and go to the bathroom. But he was determined to regain independence.

Devin eventually returned to college to finish his degree in photography and graphic design. Plagued by survivor’s guilt, he questioned the purpose of his continued existence. His agonizing ultimately led him to a simple yet powerful answer–he had survived to serve. “I tried to find purpose. I enrolled in EMT (emergency medical technicians) school; I did ride alongs with the fire department. I wanted to become a firefighter, a great one, because I wanted to prevent people from having to go through what I went through–to be the person showing up in someone’s worst moment.”

Determined to achieve one “unrealistic” goal after another, Devin received his EMT certification, worked night shift for four years at an ER, and worked as a volunteer firefighter before attaining a dream placement with Poudre Fire Authority in Fort Collins, Colorado in 2016. 2 weeks into the 22-week fire academy, Devin’s son Daxton was born. Devin praises the immense strength and support of his wife Sierra in raising a family together in the fire service.

And yet, “I wasn’t happy. I didn’t know what was wrong. I was always striving for Destination Happiness, I couldn’t enjoy anything. I drank all the time.” Knowing his family and future were at stake, Devin finally reached out to his department’s peer support system. He was shocked when he was diagnosed with PTSD. “I thought only veterans got PTSD, that I hadn’t earned the right to have PTSD. But I’ve been through trauma, and I see traumatic events every day at work. I had a lot of counseling after the fire, but I’d never had counseling after the loss of my father in 2012. I realized that I was angry, sad and upset that he missed all of these huge moments. He never got to see me become an EMT, a firefighter, a father, a husband.”

As Devin learned to heal this wound, a new challenge arose. “I started losing vision in my left eye. I got it checked out and turns out I have MS. I remembered a man I met in hospital who had MS. A quadriplegic; he had two little girls and a wife; he was an author; and his optimism had inspired me to stop wallowing in self-pity. So I thought, ok, this is just another hurdle in my race of life. I’m going to keep moving forward, stay optimistic, and enjoy everything that I have. And seven months after diagnosis, my MS is in remission. The medications are working, life is good.”

Last year, Devin became the SOTF Task Force Leader for Colorado. He says that serving with SOTF helps him fulfill another crucial aspect of burn service. “I get to serve the burn community that have survived and need to recover and rebuild. SOTF connects me with burn survivors so that together, we can help them pave their future.” It’s a collaboration that Devin knows changes lives. “I’m thrilled to be able to contribute. I want to be a champion for SOTF and share my story on their behalf to enlighten the nation. This keeps the memory of my friends alive, and speaks to people suffering from fire trauma as well as any struggles someone might be going through.”